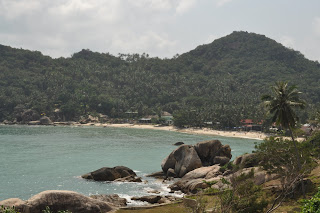 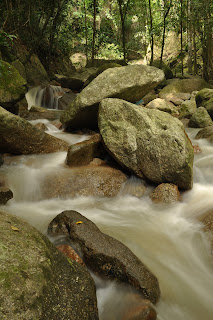 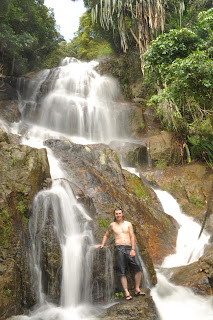 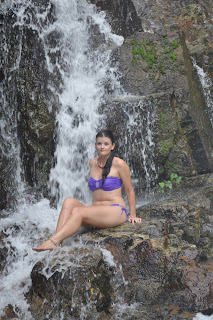 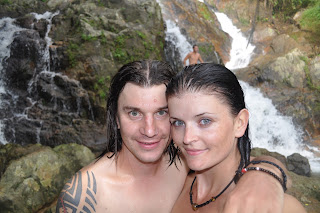 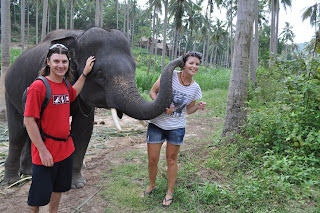 Today was spent travelling all day. First we had breaky in Krabi then checked out this cool temple. Everywhere over here you have to take your shoes off before entering any place of business, sometimes we forget in the beginning but we are like pro's now. After we waited for a bus to pick us up to take us to another bus stop to catch an even bigger bus to Donsak ferry terminal. The bus ride took roughly 4hrs and we met some cool people along the way that made the trip go alot quicker, 3 girls from Sydney and a couple from Canada. A family from Taiwan took an unexpected interest in us and we think they may have wanted to adopt us?
Getting to Koh Samui took about half an hour on the ferry. Was nice looking out over the water listening to some Ben Harper, John Butler, Panics, Kashmir and UNKLE. A very relaxing ride and a chang beer to top it off.
Arriving in Chewang we found Nids bungalows ok, was interesting getting our large backpacks on a motorbike down a very badly potholed road with me on the back, Luke decided to walk, good idea! We made it, checked in, rooms are comfortable and homely. Staff  are very attentive and friendly. Went out for dinner, took a wrong turn somewhere and ended up in what was a red light district with stripper poles at every bar and seedy old white men with about 10 young Thai girls hanging off them. One restaurant at the very end of the street, a Regae place devoted to Bob Marley that didn't play any Regae but did Thai Kareoke??!!

What to do? do a day trip to Koh Tao and do some diving or hire scooters & explore Koh Samui ourselves.
We decided to do the scooter thing & it was the best thing Luke ever suggested. We hired 2 scooters from Nids bungalows, 200 baht each. We filled our tanks for 100 baht which was silly cause we didn't even use 20 baht worth. Oh well another lesson learnt the hard way. We we got our (huge) map and set off into the mountains for some amazing waterfalls that we had heard of. On the way there was a bit of an accident, not us luckilly but the lady had some pretty bad gravel rash on her shoulders and arms. We stopped to help then went on our way again.
We stopped to have a look at a waterfall on our way the the biggest one in Koh Samui, took some photo's and questioned ourselves if we would be fitt enough to do the Inc Trail in July as the trail up from the falls was sort of steep and we were buggered from that hahaha! Was really fun riding our scooters, the roads were hectic but not quite as bad as Bali. We arrived at the parking for waterfall 2 and realised there was an elephant trakking company based there also we are both against riding elephants, they are poorly treated and are like slaves to their mahouts and make make money for them but receive little enrichments for their efforts. Once they have finished working for the day they are chained to a tree and not allowed to mingle with the other elephants. We avoided that and went for the falls which was a steep trek up the mountain side, boy was it worth it! Absolutely stunning, had a splash around and did the photoshoots, you know it is. Even Darrel came out for a bit. Those who don't know Darrel, he is coworker/mate who wanted to travel the world, so he made us a cardboard cut out of his picture so he could come around the world with us. so expect to see him pop up every now and then.
After a dip we made our way back to our Harley's and wen't to ride back to Chewang beach (about 20kn away) when a Thai guy started calling us over. We went to him down this dirt track and we saw an elephant munching on some food so we thougt we would have a look. We got to pat him and got lots of kisses from him, he wanted us to ride him but we refused. We ended up getting lots of photo's then the guy asked us for 100 baht each, took our money then chained the poor elephant to the tree. We and the elephant felt used and abused, we will redeem ourselves when we visit the Elephant santuary for abused and retired working elephants.
Leaving Koh Samui to our next destination, time to be freaked out again then settle in, seems to be the way when you stay somewhere for 2-3 days at a time. Your first day is a bit hectic and panicy, then you get a feel for the place and it's time to move on again.
Next stop Bangkok!
Posted by Sasha and Luke at 8:25 AM